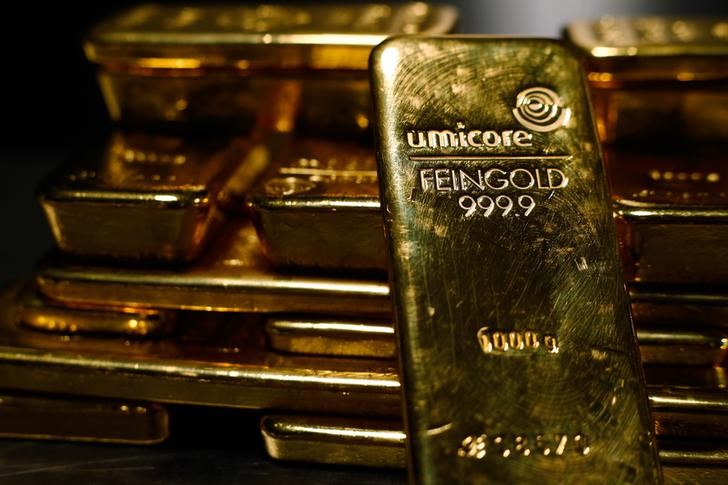 Dec 3 (Reuters) – Gold prices were trading in a narrow range on Tuesday as investors stayed on the sidelines, even as U.S. President Donald Trump’s move to slap tariffs on Brazil and Argentina stoked fresh global trade tensions.

“In SPDR gold exchange-traded funds (ETF), flows have reduced, investor demand has faltered and that’s why prices have not reacted to the trade uncertainties.”

Speculators also cut their bullish positions in COMEX gold in the week to Nov. 26, data showed on Monday. CFTC/

“People are expecting the U.S.-China trade war to de-escalate, plus the U.S. Federal Reserve has signalled that there will be no further rate cuts unless there is a U-turn in the economy, so sentiment will be bearish (in gold),” Trivedi said.

The Fed has cut interest rates three times this year and is due to meet on Dec. 10-11 for its next policy meeting.

Trump on Monday said U.S. legislation backing protesters in Hong Kong did not make trade negotiations with China easier, but added he believes Beijing still wants a deal. has risen about 14% so far this year, mainly due to the 17-month-old trade dispute.

“After strong Chinese manufacturing data, market is a bit down on gold, and slowly gold prices should move in a downward direction,” said Vandana Bharti, assistant vice-president of commodity research at SMC Comtrade.

China’s factory activity unexpectedly expanded at the quickest pace in almost three years in November, a private business survey showed on Monday. the technical front, “the metal continues to hold range bound heading into year-end, seemingly well supported around $1,450, however lacking any meaningful demand to break top-side resistance through $1,465 – $1,470 and $1,480 the key level above this,” MKS PAMP said in a note.

4 STAGES OF YOUR FOREX TRADING JOURNEY (BEGINNER TO EXPERT TRADER!)