At the beginning of this week, the EUR / USD is expected to be trading in a limited range as today’s economic calendar has no significant economic data affecting the pair’s performance, and the pair is stable near 1.1200 psychological support at the time of writing. The Euro is unable to take advantage of the upcoming US interest rate cuts expected next week when the Federal Reserve meets to determine its monetary policy. The Euro is facing increasing pressure due to the continuing fierce US-China trade dispute, which has a negative impact on the Eurozone economy, which depends on manufacturing and export.

US Federal Reserve officials are at one tone, that is the US central bank is closer to lower interest rates to counter the risks of slowing US economic growth. This week we will have an important date with the release of GDP growth figures amid expectations of a slowdown in US economic growth, and the abandonment of recent records. If the results come in less than expected, financial markets will immediately price the US interest rate cut. Before that, the pair will be waiting for the ECB’s monetary policy announcement, with expectations strongly suggest the bank will keep interest rates around zero. There will be cautious anticipation of the bank’s policy statement and the comments of its governor Mario Draghi to learn about the bank’s plans to face the continued slowdown of the Eurozone economy.

Great trade opportunities are waiting – don’t wait to profit from this pair!

Financial markets are pricing that the Federal Reserve will cut US interest rates. Which contributed strongly to the US stock indexes achieving record highs.

Technically: The general trend of the EUR / USD remains steadily bearish as investor have no appetite for the single European currency, with the Eurozone economy slowing down due to the continuation of the global trade war. Therefore, we prefer to sell from each ascending level, which is the nearest to break below 1.12psychological support, and then support levels will be 1.1170, 1.1060 and 1.0980 respectively, the nearest to the pair’s performance. On the bullish side, attempts for a bullish rebound may target the 1.1285, 1.1355 and 1.1445 resistance levels, respectively. In general the pair is holding onto a stronger bearish channel.

On the economic data front: The economic calendar today has no important data announcements from the Eurozone or from the United States of America. 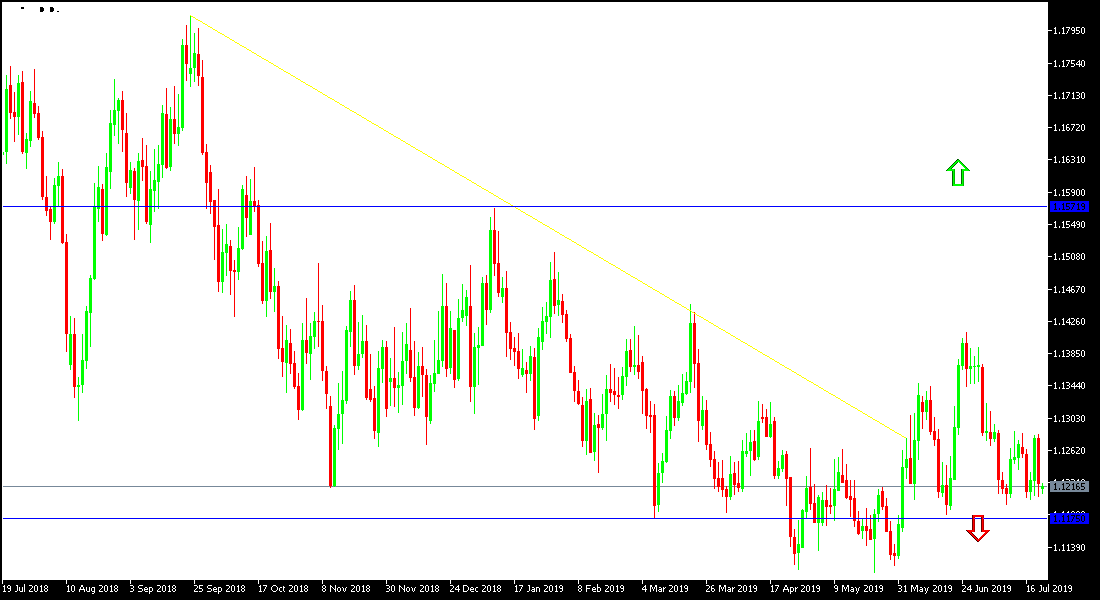